IN INSPIRING HALLS BENEATH SHADY OAKS AND BROAD MAGNOLIAS, they made lifelong friends and valuable contacts and earned degrees that prepared them for successful futures. The Forever LSU instilled in their hearts and minds while at LSU forged a lasting connection to the campus and the city, and when Red Stick called, they returned with a commitment to help make the University and Baton Rouge ever better. Check out our fifth feature on seven LSU alumni who answered that call, as part of a series that was featured in the Fall 2019 LSU Alumni Magazine. 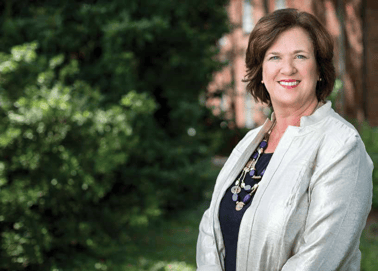 Cynthia Peterson, the first woman to serve as the dean for the College of Science, sees science as a collaborative endeavor. She earned as an undergraduate at LSU that scientific research is a concerted effort that allows team members to have fun while making progress toward groundbreaking solutions. Having left Louisiana to pursue her career after
graduate school, Peterson returned twenty-two years.

Cynthia Peterson, the first woman to serve as the dean for the College of Science, sees science as a collaborative endeavor. She learned as an undergraduate at LSU that scientific research is a concerted effort that allows team members to have fun while making progress toward groundbreaking solutions. Having left Louisiana to pursue her career after graduate school, Peterson returned twenty-two years.

A music lover, Peterson presented a TEDxLSU talk in which she explained how scientists, like musicians, respect each other, listen to each other, learn from each other, and find the rhythms and harmonies in their individual and collective work that soar, enlighten, and inspire. That talk epitomizes Peterson’s leadership style, and that style is part of the formula that is paying big dividends as the college continues to experience increases in enrollment that are phenomenal.

Peterson was born in Baton Rouge but grew up in a number of places, both in the U.S. and abroad, as her family followed her father’s Air Force career. The family settled in Shreveport when she was in junior high, and she finished high school there as the valedictorian of her class. LSU was part of the family tradition, but the determining factor in her decision to attend LSU was the University’s offer of an LSU Alumni Top 100 (now Flagship) Scholarship.

She chose to major in biochemistry, though she wasn’t sure of her career direction until, in her junior year, she took a course that gave her the opportunity to work in a laboratory. During the first half of the semester, the students worked in teams on projects chosen for them, but in the second half, they were challenged individually to find a professor to work with on a project. “That was my introduction to research,” she said. Professor Rich Gandour in the chemistry department set her to work on a real project using a spectrophotometer, giving her insight into the collaborative side of science. “I began to understand that laboratory science is not a solitary endeavor. All these other people – not only the professor but graduate students and post-docs – were working in the lab along with me. People socialized and had a good time together while they worked hard, and I thought, ‘What a cool thing!’ It was an insight I don’t think I would have had any other way.”

As a senior, she served as an undergraduate teaching assistant, an experience she counts as the second turning point in her career path. “I took that as a huge responsibility,” she recalled. “I was expected to teach my class, make sure they were prepared for exams – so that gave me a little bit of teaching experience.” She discovered she really liked being on the other side of the desk, and she realized that, if she wanted to teach at the university level, she needed to go to graduate school, so she did. “I didn’t come into the University knowing what I wanted to do – that evolved over time – but I found myself at LSU,” Peterson recalls. “The experience I had as an undergraduate at LSU launched my career.”

After graduation, Peterson chose the graduate program in biochemistry at LSU Medical Center in Shreveport as her next academic step. “Some of my classes were with the medical students, but I found I got a lot of personal mentoring in the continuing courses in my field because the classes were small. Working on my Ph.D., I had a project that seeded my interest in protease inhibitors. I started working in that area then, and I’m still working in the same broad area of protease inhibitors today.”

An early learning experience that made a significant impact on her life: “I am forever grateful to a senior faculty member who was well-known for his successful NIH grant-writing ability. Early on, he agreed to read through a draft of my first grant – which was a lot to ask of someone to begin with, a time-consuming task – and he took time with me and gave me candid feedback. Essentially, he said, ‘This needs a lot of work.’ I sort of hung my head after he left, but I picked it back up off my chest and listened to his advice, and that grant was funded on first submission. It’s that kind of mentoring and caring about other people that makes a difference in someone’s career. With that kind of support, I was able to be successful, eventually becoming the chair of my department and moving into an associate dean position.”

Since returning to LSU, Peterson has overseen significant increases in college enrollment, with a 25 percent increase in freshman enrollment in fall 2018 that came from a 46 percent increase in undergraduate applications that year. As of mid-2019, the increases were continuing. Her initial strategy was fairly simple: She talked to lots of people in the college. “There are five separate units and about 250 faculty members in the college,” she said. “That’s a lot of people with different expertise, way more than I, as a biochemist, could begin to know. And just reading about somebody on paper wasn’t going to be enough to really understand the fabric of the college. I spent my first semester at LSU talking with each of the faculty members to hear about their passions, their research, their dreams, what they like about LSU, what could be done differently. I really wanted to understand who we are.”

From those conversations, and with some additional research, Peterson developed a plan to bring the various units within the college together. A major commonality was the emphasis on research as a part of education. “Every semester, we have about 300 undergraduates who are actually doing research in the laboratories across the college,” Peterson said. “And of course, graduate education is an essential component of who we are and what we do. We have about 500 graduate students in the college.”

Another aspect was to bring the units together as often as possible. She explained, “The work at the edges of
the disciplines is really some of the most exciting space and where things are moving forward. I’m not trying to homogenize the disciplines, because there is value in each, but there’s great synergy when we bring ideas together from these different areas.”

The critical element, however, was to communicate the college’s strengths. “My vision – our vision, it’s a shared vision as a group – for the college is to be at the forefront, to be on the cutting edge, to be pushing the boundaries, training the next generation of scientists, and also to continue to make the landmark discoveries that we’re currently getting so much press for,” she said.

Under Peterson’s leadership, the college has developed a number of outreach projects that connect it with the local community and inspire the next generation of scientists – beginning in kindergarten and continuing through high school. Additionally, the college has produced a video that shows in movie theaters, publishes newsletters and annual reports, and underwrites “Science Friday” through the local public radio station.

Peterson has an additional goal: As the first female dean of the college, she takes diversity as a major responsibility. “There are many areas in science where diversity has been slower to develop than in other fields,” she acknowledged. “To address those issues, I’ve established an office of diversity and inclusion in the college with a great leader, Zakiya Wilson-Kennedy. We’re getting funding from several federal agencies to develop and implement programming. We’re hitting a large range of students, helping to show them that LSU is a very inviting place.”

Despite her myriad responsibilities, Peterson continues her research and, with the help of Yuzhuo Chu, a post-doctoral fellow, maintains a lab on campus. She credits Chu with helping keep her on track with her research. “I am a scientist, so it was important to me, when I came to LSU, to make sure that I didn’t give that part of myself up, that I continued that scholarship,” she explained.

Her reason for returning to LSU after so many years away resonates with a sentiment that other returning LSU alums share. “I enjoyed my colleagues and my time in Tennessee very much. I was not on the job market; I was very settled,” she said. “But then the phone rang. The person who called said they wanted to talk to me about a position as dean of a college of science at a major research university – in Louisiana. It didn’t take much in the way of deduction to think, ‘That would be my alma mater! My alma mater, the place that launched my career, that beautiful campus, a place so familiar to me, so dear to my heart. Well, my goodness, maybe I’ll just think about that.’ And here I am. LSU has its own special character, a joie de vivre, a wonderful culture, a kind of ‘jazz culture,’ a rhythm that inspires and draws us back, no matter where we are or what we’re doing.”