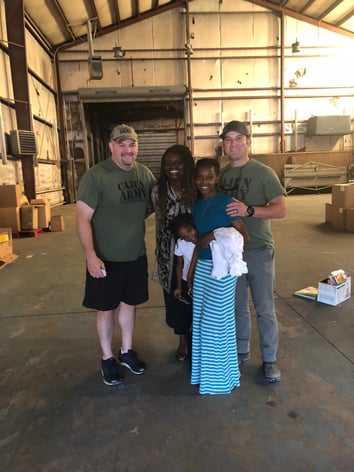 Chris King, left, and Nick Loupe, right, co-founders of the Cajun Army, with Elberta Pugh-Hudson, grandmother, flood survivor, and widowed pastor of the St. Paul A.M.E. Church in Teachey, N.C., who lost everything she owned.

When there’s flooding in Louisiana and Texas, sometimes as far away as North Carolina, Chris King’s business calls are interrupted by calls for help. King is co-founder and president of the Cajun Army. Like its brother organization, the Cajun Navy, the Cajun Army is an all-volunteer group dedicated to flood relief. Any flotilla of private boats may call itself Cajun Navy. There is just one Cajun Army, founded and trademarked by King in 2016.

The Cajun Army was born during an 11-hour boat rescue of some of King’s employees in the August 2016 flood. Clients Nick and Josh Loupe and King piloted a 12-foot boat and a 16-footer from Port Vincent, up the Amite River in full flood, through a cut in the woods to waiting employees and their families.

“On the way back to Port Vincent,” King said, “we were 13 people, three dogs and piles of personal possessions. We had a lot of time to talk going and coming, passing one flooded neighborhood after another.”

In August 2016, a no-name storm dumped more than thirty inches of rain on Baton Rouge and nearby parishes in two days. King saw what the flood did to his employees’ homes and lives. After eleven hours of boat rescue and seeing the misery occasioned by the flood, the ministry/business organizer part of King’s brain clicked on.

King, 49, a 2006 LSU graduate in business management, started Next Level Solutions (NLS) six years ago at his kitchen table. “We help small businesses with accounting, human resources, and technology,” King said. “We free their admin teams or owners to focus on business.”

Floods have launched Cajun navies, a Cajun commissary, even a Cajun special forces. King’s Cajun Army doesn’t get the publicity some other relief organizations get. “We show up after the television cameras leave,” said King, seated at his desk in NLS offices.

For King, small to medium businesses are those that generate up to $50 million and have as many as 150 employees. The government’s definition of a small business varies, but King says, “99 percent of U.S. companies may be classified small business but account for only 44 percent of the GDP.”

With sales of $1 million annually and twenty employees, twelve of whom are fulltime, NLS is among the nation’s small businesses. “I’m not wealthy from this business,” he said. “My wife and I live a conservative life style. We drive paid-up vehicles.”

King and wife Amy, a first grade teacher who had a previous career as a corporate accountant, have two daughters, both students at LSU. Amy King is a graduate of the University of Wisconsin at La Crosse.

King, a youth ministry volunteer at First United Methodist Church and volunteer with Kairos Prison Ministry at Angola, knew from organizing mission trips that finding food and shelter for volunteers would be essential to his Cajun Army. With the help of Cajun Navy dispatchers and a Cajun Army Facebook page, King and his corps of volunteers have helped restore homes in Louisiana, Texas, and North Carolina.

“The Cajun Navy, Army, and Commissary is a dysfunctional family,” he laughed. “We (the Cajun Army) sit back and assess. How can we best engage? They’ve been rescued. Now, they’re faced with gutting their houses and moving their ruined stuff to the curb. People don’t know all the places we’ve been.”

“The government can help some people but not all,” he said.

Dysfunctional, maybe, but the volunteer flood relief groups operate at their own direction, using their own boats, trucks, and kitchen gear. Somehow, the money to operate materializes, even if the volunteers have to reach into their own pockets, King said.

“Operation Supa-Chikin Day” provided 8,000 chicken kabobs with sides to flooding victims in North Baton Rouge neighborhoods in 2016. When the would-be donor of the chicken didn’t come through, chicken day wasn’t looking too super – until the Greater New Orleans Food Bank stepped in.

King knows what it is to start over. He came back from a business failure in his late twenties. As a student at Episcopal School of Baton Rouge, he worked to pay his tuition after his family lost its money. Married with children, he worked to put himself through LSU.

It’s exhausting listening to King go through his daily schedule, not to mention his work with the Cajun Army. He recharges by “running home for a nap,” and working out at the gym.

How long does the Cajun Army’s relief work last for each flood? “It lasts until the volunteers quit coming.” King said.

Volunteers from France have worked in the Cajun Army to gut flooded homes. “We have a developer and technology team leader in Israel,” King said.

The Cajun Army Facebook group numbers 18,000. A few dozen to a few hundred volunteers may show up in person. There are Amazon wish list donors around the country who purchase equipment the army needs or replacements for things flooding victims have lost.

A week after the September 2019 flooding in Houston, King got a call from someone in Hamshire, Texas., one of the towns in which the Cajun Army worked after Hurricane Harvey in 2017. He was anticipating a staged, team deployment of sixty to ninety days. Two to three hundred Cajun Army volunteers would be involved in some way, he said.

“Just about everybody we helped in Harvey has flooded again,” King said.

King doesn’t concern himself with unwise development or why people choose to live in places that flood repeatedly. He calls it “the politics of flooding.”

“We don’t get into that,” King said. “We’re here to give people hope.” 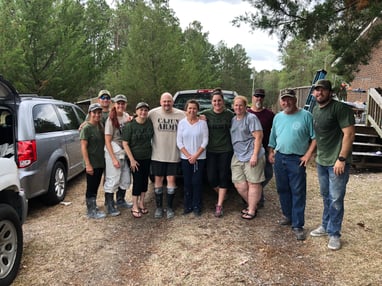