Travis Andrews is a lifelong writer, proud LSU alumnus, and now published author. While he is currently a features writer for The Washington Post, Andrews started his career the second he came to LSU when he joined the LSU Reveille staff. Being a writer is all he has ever wanted to do, and he is now officially a published author with so much future success ahead of him. Andrews' first book, Because He's Jeff Goldblum, hit stores just yesterday.

Tell us a little bit about your new book, Because He’s Jeff Goldblum. 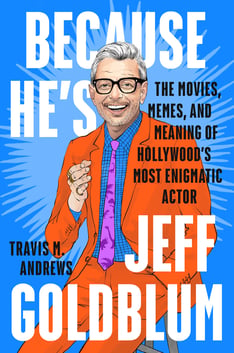 Absolutely! The book is a semi-biography and semi-celebration of the iconic actor and his career. It’s also a rumination on how the nature of fame has shifted in the Internet age, allowing a ‘90s A-list actor to maintain a certain level of awareness thirty years old. I spoke with everyone from directors and actors who worked with him to cultural critics like Chuck Klosterman and Sean Fennessey to get to the bottom of this whole Goldblum thing.

That might sound a bit heady, but my primary goal with the book is to entertain the reader. To that end, it’s full of fun “interludes” between chapters that include a Goldblum haiku section (with a place to write you own!), a ridiculous one-act play in which a young Goldblum meets his current self and a “recipe” for having a Goldblum-esque Instagram account. I think it’s an awful lot of fun — and funny, to boot!

What path did your career take after graduating from LSU?

Well, that’s one long and windy story that begins just after graduation (2009) in Chicago, where I worked in digital advertising. After that, I moved back to my hometown of New Orleans, where I did more advertising work and began freelancing in journalism. After interning at Washingtonian magazine in D.C., I freelanced for a variety of outlets including GQ, Esquire, Mashable, and Time. Eventually, I got a gig working as a culture and travel writer with Southern Living magazine, before taking a job with The Washington Post — where I currently work as a features writer.

What made you decide to become an author?

Ever since I was young, I adored books. I remember a grammar school teacher fussing at me for being tired because I’d stay up ‘til twilight reading anything I could get my hands on. When I got to LSU, I immediately joined the staff of The Reveille so I could write as often as possible while also studying creative writing under some truly wonderful professors. Since then, I’ve followed that career path until the point where I was lucky enough to have the opportunity to write a book.

If you weren’t a journalist and author, what would you be doing?

Honestly, I’d probably be trying to be a journalist and author! If I had to choose something else, I’d likely work with animals. I think I would have loved being a veterinarian. When I was at LSU, one of my friends fed and milked the cows on campus every week as part of his work-study program. I’d sometimes join, and it was a wonderfully peaceful way to pass a morning. Plus, I’m obsessed with dogs – particularly my pup Stevie Nix, whom I mention way too often in a book that’s ostensibly about a ‘90s actor.

Do you have a mentor that helped you along the way?

I’ve been lucky enough to have several over the years. I can’t thank Professor James Wilcox in the LSU English department enough — he really helped me find my voice as a writer. Kim Cross, an author and former editor at Southern Living, helped me navigate the book world, and to her, I owe a great debt. Finally, I would have to thank Fred Barbash, the editor who brought me to The Post and really helped me further hone my reporting chops. Without those three, I would have never been able to write a solid paragraph, much less an entire book.

When you were at LSU, where was your favorite spot on campus?

This is a good question! There are a few off-campus joints I really miss. I spent most of my nights at Highland Coffees or The Chimes. I spent so much time in the basement of Hodges as a member of The Reveille, and I loved visiting Mike, particularly at night when he didn’t have a ton of onlookers. Embarrassingly, I was known to take a nap or two in the quad from time to time. But what I miss most, bar none is the LSU lakes. I rowed crew, and I so miss waking up to skim the lakes as all the birds woke up and that great orange sun rose — long before most of campus. I can’t imagine anything more peaceful.

If you could give one piece of advice to entering freshman what would it be?

Take advantage of everything LSU has to offer. It’s such a cliché to say you’ll get out of college what you put into it, but clichés are clichés for a reason. If you’re already interested in something, be it theater or journalism or a particular sport, then seek out the club/production/etc. that will allow you to actually participate in those things. If you’re still figuring it out, then join clubs, attend performances, etc. LSU offers an incredible wealth of opportunities, and I wish I’d taken better advantage of them all while I was there.

One other bit of advice I’d give: My friend Sajid Qadri and I would often just wander campus and explore different buildings. We were often shocked and delighted by what we’d find just by taking the time to explore. I recommend being curious on campus — there’s so much more there than you’d think.

How long did it take you to write your book?

About a year and a half from writing the proposal, which included a sample chapter, to the completion of a first manuscript. Then probably another month or two in the editing process.

What do you miss most about LSU?

That list is far longer than we have space for here. I think what sums it ups best is the camaraderie. From my fellow rowers on the crew team to the staff of The Reveille to my fellow creative writing majors — There’s something special about the connections you form in college, something slightly different than those you find later in life.

Plus, obviously, Saturdays in Tiger Stadium (and the tailgating preceding them).

Why Are you proud to be an lsu alumnus?

I’m constantly in awe of the careers (and lives) so many of my fellow alumni built for themselves — I work with three other LSU grads at The Washington Post, just for starters. But more than that, I’m so grateful for the connections I found there and continue to find. I often wear an LSU scarf or T-shirt around my Washington, D.C. neighborhood, and almost every single time — no hyperbole here — I’ll get tossed a “Geaux, Tigers!” and find myself meeting a fellow alum on the street or in the Metro. That’s something special.