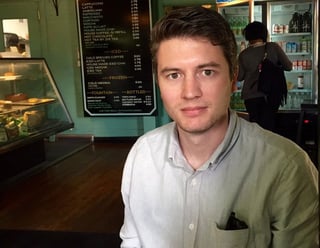 The books Lance Person’s Belle Lutte Press has published get reviews that include the words “captivating” and “compelling.” The reviews he likes best say Belle Lutte’s books are “well-written.”

Outsiders look at Person (2010 BACH H&SS) and see another Don Quixote weaving among the windmills of “big publishing houses.” Person, twenty-eight, is as skilled with the literary lance as he is the thumbed nose. “I took a writing test to become a submission reader for Granta magazine,” he said from his home in Austin. “I saw a lot turned down that could have been published somewhere else, and I’m sure it was.”

The old American publishing houses have their place, but they are profit oriented. They end up publishing a mixture of literature and schlock, Person thinks. “A lot of the big publishers are only interested in publishing stuff they know will sell or something in a particular genre,” the former practicing lawyer said.

Is the idea to try to publish good novels until one of them makes the publisher and the writer big bucks? “The books I publish don’t need to hit the jackpot,” he said. The idea is to publish a few, outstanding books each year that “will continue to sell and build up a catalog of great work,” Person said.

The promise of financial success doesn’t motivate the Eunice, La.-born editor. Person is quick to say he’s not a writer. He’s an editor. A good one, he thinks. He went through 1,000 submissions before publishing Vince Wheeler’s The Things of Man and followed that with Jim Naremore’s The Arts of Legerdemain as Taught by Ghosts. He pays his authors’ advances – not enough to live on, but he pays. Three novels are in the works for this year. In the 2017 Independent Publisher Book Awards, The Things of Man won a silver medal for Best Midwest Fiction, and The Arts of Legerdemain as Taught by Ghosts won a bronze for Best First Book

Person studied creative writing as an undergraduate at LSU. His first degree was in English with a specialty in creative writing. Then, he earned a law degree from Washington and Lee. By 2013, he was practicing commercial litigation in Baton Rouge where he discovered he didn’t want to practice law. So, why law school? “It was just my romantic idea about the practice of law,” he said. “The war of words I was looking for was more in literature than in law.”

At Belle Lutte, Person, readers, copy readers, and developmental editors (hired on a per-book basis) go “through tons of edits and multiple beta readers.” The betas, hired for their love of literature, offer general opinions of a book before publication. Alpha and beta, as applied to non-professional, pre-publication readers, are terms that migrated from the computer software world. In the computer biz, “alphas” and “betas” are savvy folk who try out new software. Beta readers, in a sense, are trying out books before paying-readers see the books on shelves at the bookstore or online.

For Person, belle lutte means to struggle beautifully. “Being from Acadiana, I thought it apropos.”

He’s happy with the move to Austin two years ago. “Austin seemed to be a hub of innovation for literature,” he told the Austin American-Statesman. “It’s clearly got a burgeoning literary scene. Also, I felt the people of Austin would get what we are shooting for.”

Who at LSU influenced him? “Jack May. American literature. Coming of age. May’s love and passion for every single work. It was as though each work was the best thing he’d ever read. And Randolph Thomas. He taught creative writing. For me, he was the window into the writing community. He’s a writer. He demanded … hard work. He respected all forms of writing.”

What did LSU give Person? “What did I get? The Quadrangle. The murals in Allen Hall. The ghosts of Robert Penn Warren and T. Harry Williams. My friends took classes in the new buildings on the outskirts of campus. I wanted to walk the halls where those guys walked. It made me want to live up to the people who went before me.”