A 'Soulful Journey' with Randell Henry 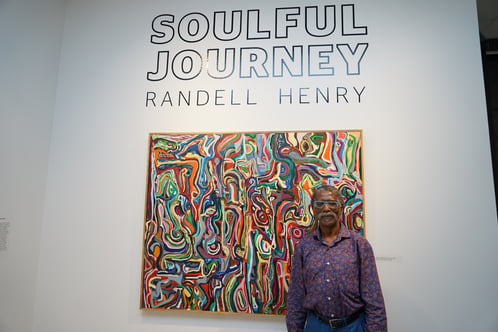 Randell Henry with his “Land of Bright and Dark Spaces.” Photo courtesy of LASM

Baton Rouge artist Randell Henry (1982 MAST A&D) saw graduate school in his future in junior high. Crestworth was prep school for an art education that would include an undergraduate degree from Southern University and a master’s from LSU.

Some of Henry’s early art mentors were graduate students. “I guess they had to work while they were in graduate school,” Henry said of his teachers. “People like John Byars. He was my art teacher at Crestworth.” Byars not only taught Henry, he was his first agent. When Byars saw something of Henry’s he thought exceptional, he collected the work for exhibit at LSU. “I found out later,” Henry said.

Henry took a bus to school. When it was time to truck his semester’s work home, Byars loaded his student’s work into his car to take Henry and his art to Henry’s house. When Mrs. Henry called it junk, Byars took exception. From Byars, Henry heard the first defense of art for art’s sake.

While Carrie Henry was not her son’s biggest patron, she did come across with $5 for acrylic paints with the admonition that he should make it last. The only paint in the household budget was the kind that went on the outside of the house. “She pressed a $5 bill in my hand, and said, ‘That’s it.’” Mrs. Henry’s other contribution was passive. She sewed designs into her quilts, designs her son liked to get lost in.

From beyond memory, Henry was a sponge when it came to art. He memorized what teachers told him, and he studied the meager art book collection in the junior high school library. He’s not sure when abstract expressionism came into his vocabulary but long before LSU art professor Ed Pramuk lectured on the subject.

Though Henry’s work would eventually be shown around the country, Pramuk prepared him for the long haul and the reality of making art to make a living. “One thing Ed Pramuk told me years ago,” Henry began in a soft voice. “Said, ‘To make it as an artist you have to connect to the closest art center.’ For me, that was New Orleans.”

Henry is a longtime artist member of the Baton Rouge Gallery. One of his pieces fetched a modest price at the gallery’s recent fall art auction. The audience, a pep rally where wine drinking is encouraged, applauded enthusiastically when Henry’s piece came up, a riot of color one could warm his hands on that cold November night. “What I got from Ed Pramuk was, ‘It’s, like, bloom where you’re planted.’”

Henry’s exhibit at the Louisiana Art and Science Museum is in the late-lamented Soupcon space. Gone are the smells of scrumptious soups and gumbos, but light floods the room through a huge window. The colors in Henry’s paintings fire back. LASM curator Elizabeth Weinstein likes Henry. You can tell by the way she smiles as the words tumble from the artist, softly, in a rush to get out. Henry prefaces utterances he considers important with, “OK, now put this in there.” A reporter bends to the task, and Henry back tracks, to sneak up on that important thing he must say next.

“We decided to take a snapshot of his work,” said Weinstein. The exhibit covers Henry’s work from the 1980s through 2019. On display is “his bold use of color, his art from no narrative to his more emotional work,” she said. “From his telling stories, to his abstract expressionism,” the series of paintings pulls you around the room.

“I was thinking I would call the exhibit my soulful journey,” Henry said. “But I didn’t tell her that. I wanted to see what she’d come up with.” Weinstein called the pictures Henry’s “Soulful Journey” when the lettering request went to the graphics person.

The journey started across the Mississippi River in Port Allen where Henry lived until after second grade. The little river town is visible through the Soupcon bay window. Henry remembers a family outing to a fair, mother Carrie, father Harold, Henry, and his six siblings. Carrie worked the soda fountain at Kress on Third Street in Baton Rouge. Harold was a janitor at City National Bank on Scenic Highway and at Crestworth Junior High. “My parents took us to the fair,” Henry said, remembering the rides, smelling the air. “A man selling balloons came up to the car. There was one in the shape of a lion. I wanted that balloon. I was trying to reach him a quarter, but my mom tried to stop me. I reached around.”

By the time the Henrys moved to Baton Rouge, the die had been cast. If someone told Henry he couldn’t do something, he wanted to know why not. If the reason he got wasn’t good enough, he did it anyway. Baseball, it turned out, was beyond his grasp. Never big, the sixty-one-year-old Henry stands 5 feet, 9 inches. He weighs 157; has a 32-inch waist. “I walk a lot,” he said.

Henry wanted to play basketball, but baseball suited his size better. “I thought I’d play baseball fulltime and make art in my spare time.” The baseball gods seemed to be smiling when Henry stepped to the plate one day at Crestworth Junior High. He got good wood on the ball, and he was off. Rounding first, his classmates were yelling his name. At second base, they were screaming. Around third and heading home, the other kids were beside themselves. Reaching home plate, young Willie Mays collapsed in the arms of his friends. “They were yelling.” And laughing. Mr. Baseball hadn’t touched first base.

Henry’s mother supported his art as long as it didn’t cost the family money. His dad was equally passive. He didn’t mind his son’s using the family’s derelict station wagon as an art studio.“I said to myself, ‘There’s a lot of room in there.’ I used the steering wheel as an easel.”

He thinks the years after graduate school at LSU were his most productive. One day in the mid-1980s, he got a call out of the blue from the wife of one of his instructors at Southern University offering him a teaching job. Henry, single, had been supporting himself as a substitute teacher. His scheme of working and saving, then taking off to paint was producing some work of which he was proud, but making art wasn’t the same as making rent.

Henry had become a decent artist. He could do likenesses and landscapes, but it was abstract art that freed his mind and spirit. He indulged himself in design and color. At first, he told stories a viewer might guess. In his abstract paintings, only he knew the story. The viewer basked in the color, got lost and found in the design. Once, he got a chance to have one of his paintings projected on the side of a building in New York City. “I didn’t go see it,” he said.

Early in the LASM exhibit, an art class instructor on the Mississippi Queen riverboat happened into the Soupcon. A chance meeting with Henry happened, and the art teacher invited Henry to show some of his paintings at a show in Queens, N.Y. “So, another New York exhibit,” Henry said happily.

The artist spent his happiest, most productive years in the Ridley Building on Highland Road in the early 1980s. To this day, he rents a small space from wood artist Patrick Ricard. Does Ricard see Henry often? “Not often,” said Ricard. “Months go by, and I don’t see Randell (Ran-DELL). Then, I walk in one morning, and there’ll be this little pile of money in an envelope. I count the money (and divide by the rate of rent). I won’t have seen Randell in that many months.”

“Put this in there,” Henry said. “Say Jean Paul Hubbard at Southern was a great painter. He taught me how to use color and develop form. Say Rebecca Cureau, the wife of one of my professors, Harold Cureau, gave me my job as an art instructor at Southern. Professor Harvey Sherman Harris at LSU liked something of mine. He wanted to swap me something of his. I wish I’d taken him up on it.”

“It would be good to mention that LSU brings big artists from New York City to work with the students,” Henry said.

While Henry’s work has shown in other cities in this country and abroad, his work is most associated with Baton Rouge Gallery, private, local collectors, public spaces including the main Baton Rouge library, and LASM through May 31, 2020.

“Oh, say Roy Norton was a radio minister who taught me art at Scotlandville High,” Henry said. “One day in class, he showed us a Butterfinger candy bar, but it was a drawing on a piece of paper. That impressed me. Roy Norton inspired me. He saw me as a serious artist.”

Cordell and Ava Haymon go way back with Henry. Ava Haymon and Henry taught writing and art to public school children with an Arts Council grant. “I loved watching Randell with the children,” Haymon said. “He’s a marvelous teacher of young children. His collage making touched a little boy who was obviously in trouble all the time. Randell Henry said something very important to that child.” “I remember that boy,” Henry said. “I wonder what happened to him.” “We have some of his early work,” Haymon said. “It’s African. And his collages are interesting. The wavy thing he does now is very difficult to map out.”

The Haymons underwrote some of the cost of the LASM opening of Henry’s exhibit. It was payback for Henry’s showing up at every one of Haymon’s poetry readings. Haymon, the 2013-2015 Louisiana poet laureate, said LASM curator Weinstein was told by a Baton Rouge artist that Henry does not miss a show by a local artist.

Leaving his exhibit at LASM, Henry stopped to talk to a museum volunteer. Weinstein happened by. Someone else stopped to see what was going on. Henry might have talked through lunch but gumbo was calling. Walking down an exhibit of musical stairs, Henry began to dance on the steps. No Gregory Hines. Just Henry on his way to lunch, making music with his shoes in Ran-DELL time.