Susan began painting and designing flowers on her family farm in the Mississippi Delta. After receiving her Bachelors of Fine Art from Louisiana State University in 1999, she traveled to the hills of Tuscany, where she began her first watercolor journals. 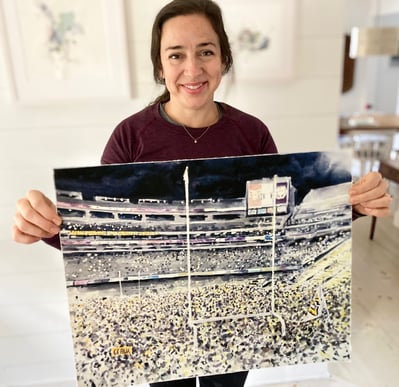 It all started when, as a child, Susan began painting and designing flowers on her
family farm in the Mississippi Delta. After receiving her Bac
helor of Fine Art from Louisiana State University in 1999, she traveled to the hills of Tuscany, wh
ere she began her first watercolor journals. In 2003, she received her MFA from the University of Mississippi, and then followed the well-trodden artists' path to New York City, working in floral design while painting and showing her art.

Susan has honed her watercolor skills on travels through Europe and Central and South America, filling journals with daily experiences. While painting the Corcovado in Rio de Janeiro, she arrived upon her now-signature "sketch portrait" style. Her first commission came as a bit of a surprise; sitting on the beach in Florida, a mother noticed Susan and her journal and convinced her to paint her children. Since then, Susan estimates she has created over 8,000 sketch portraits of children, families, weddings, pets, and houses.

Her work has been featured in exhibitions in Baton Rouge, LA; New York, NY; Cortona, Italy; New Orleans, LA; Oxford, MS; Jackson, MS, and Raleigh, NC. She has been featured in Southern Living, Design*Sponge, Do Say Give, Holly Mathis Interiors, and Paper and Ink. She lives and works in Raleigh, NC with her artist husband Daniel Kelly IV and their two children.

Story of the Death Valley painting

"I was talking on the phone with my father recently. I wanted to hear about his weekend with my mom in Baton Rouge at the LSU/Alabama game and just say hello. He told me that it was one of the top five games he has ever seen at Tiger Stadium. He's 73 and has been going to games there since he was 8 or 9. He graduated from LSU in 1971 and still attends almost every home game.

When I was a student there in the 90s he would ask me to paint different places on the campus as his Christmas present. I think there are over a dozen watercolors of the LSU campus in his collection but still one really obvious missing piece: SATURDAY NIGHT IN DEATH VALLEY! I am not sure why I didn't paint it sooner. I think it just seemed too intimidating (that same magic spell for opponents works on artists, I guess) but after his comment on the phone, I knew it would be the perfect gift for this year!" 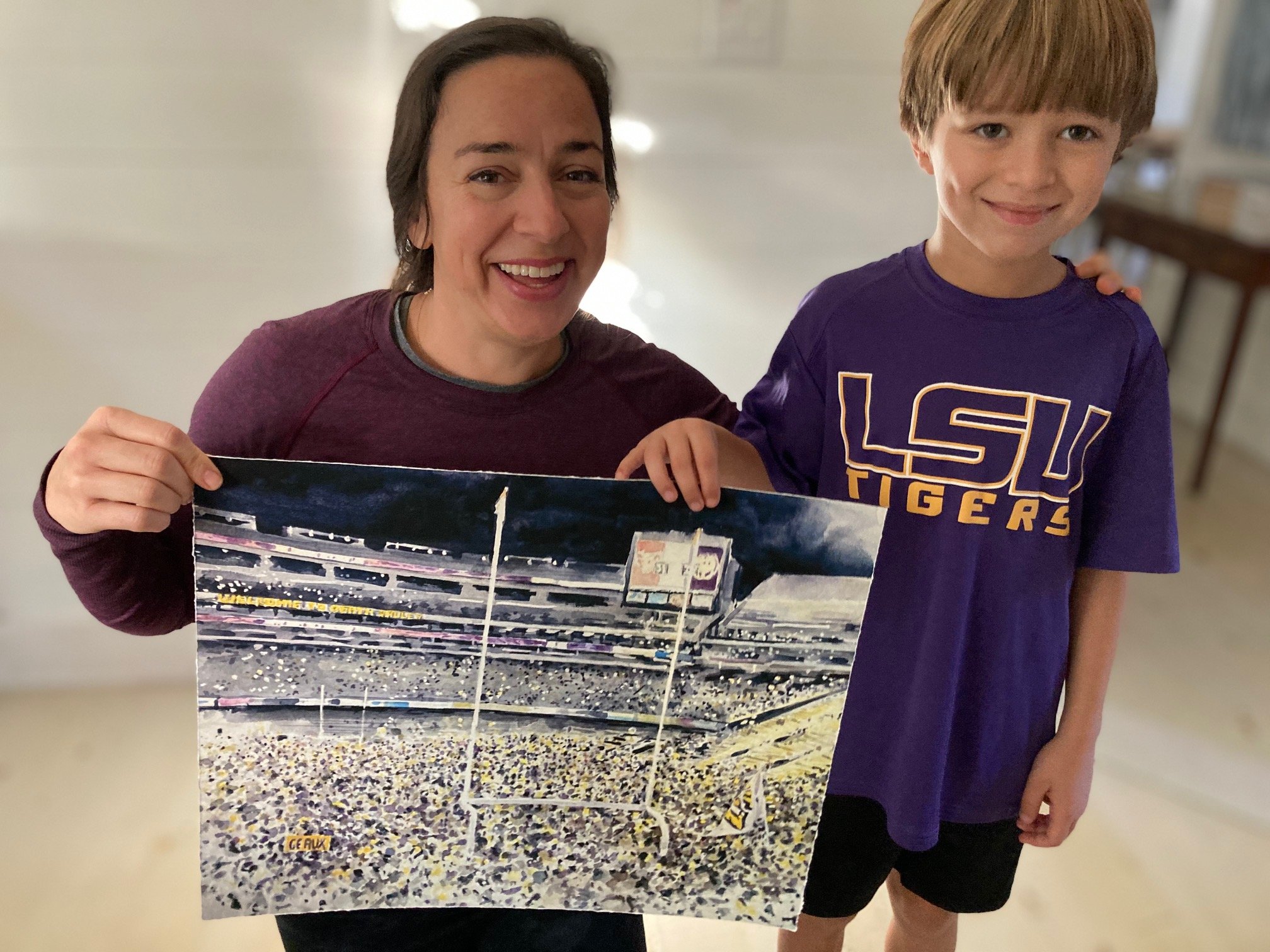 Watercolor portraits are done in a loose, colorful style. I also have a side business of painting college landmarks that started as a result of my father’s requests for LSU landmarks!

Link to order Death Valley painting and other LSU paintings

LSU Alumna Kate Eddy shared why she is proud to be an LSU Alum, her best advice for LSU students, why she loves working in comedy for The Second...

LSU Alumna Sherry Sanchez traveled across the world to Azerbaijan to check it off of her bucket list, and planned to visit the Rajun' Cajun...

Meet Alex Torres, our Hispanic Heritage Month Alumni Spotlight. In 2020, she obtained her Ph.D. in English with a graduate minor in Women’s and...