2020 Hall of Distinction: Lewis May

Congratulations to one of our 2020 LSU Alumni Hall of Distinction honorees, Lewis May. 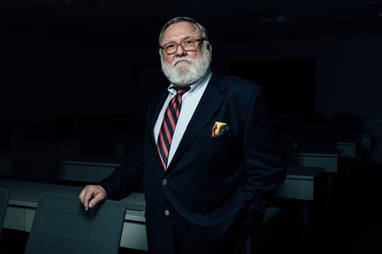 Lewis May, one of America’s leading planners, urban designers, and landscape architects, earned bachelor’s and master’s degrees in landscape architecture at LSU, and his five-decade career has earned him nearly 200 international awards of excellence for his global design practice.

May holds a bachelor’s degree in environmental design (1969) and a master’s degree in landscape architecture (1973) from LSU. It was during his years at LSU that May began to understand the meaning and purpose of his education and the impact he could have on the future of the built environment and how we all share responsibility for the ecology of our planet.

Today millions of people around the globe live in urban environments planned or designed by May. His urban design portfolio includes projects in Europe, Asia, Africa, the Far East, Arabia, and throughout the Americas.

At the invitation of his highness King Abdullah of Jordan, May recently participated in an international summit focused on planning and design of arid environments related to the immigration crisis resultant from the conflicts in the Middle East. May was also recently invited to Honduras to teach as well as lecture in urban design and its transformative impact on community societal health.

Early in his career, May was recognized by the American Institute of Architects at the Kennedy Center in Washington as “one of the outstanding landscape architects and planners in America.”

Today, he shares this extensive knowledge with students through teaching positions, including the University of Houston’s Gerald D. Hines College of Architecture where he founded the Center for Urban Ecology and served as director. May was appointed to the board of Rice University’s prestigious Baker Institutes’ Center for Population Health based largely on his advocacy for urban underserved populations. At the University of Houston’s Center for Urban Ecology his research was focused on education, health, and economic revitalization of inner‐city communities and neighborhoods. May was also a visiting professor at the Centre d’etude d’architecture et urbanisme en Santé France. Currently May serves on the board of the Jeffersonian Institute where he continues his advocacy for community health, education, and the environment.

May resides in Houston, Texas. He collects art and antiquities and enjoys time in the kitchen and time in the garden with friends and the companionship of Earl, his dog.

LSU had and continues to have an incredible impact on my career, as well as my life. The lessons learned at LSU, both in and out of the classroom, continue to shape who I am and what I believe in.