Congratulations to one of our 2020 LSU Alumni Hall of Distinction honorees, Kurt Davis. 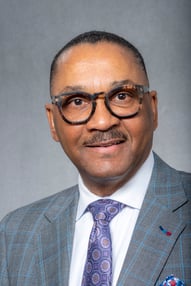 Kurt Davis, executive vice president of affiliate relations at ViacomCBS, earned a bachelor’s degree in journalism from LSU in 1983. While at LSU, Davis was awarded an internship funded for minority students, which allowed him to work alongside proven professionals while continuing his education and helped launch his professional career.

An established journalist and news executive, Davis joined CBS News in 2013 after more than two decades of experience in the broadcast industry. As vice president for news services at CBS News, he oversaw CBS Newspath, the CBS News satellite newsgathering organization that provides editorial content and technical support to more than 200 affiliates in the U.S. and dozens of worldwide partners.

Prior to joining CBS, Davis spent ten years as executive news director at CBS Affiliate KENS-TV in San Antonio, Texas, overseeing all editorial content and setting short- and long-term strategies for the unit. He was previously manager of coverage and content at WSB-TV in Atlanta, Georgia; news director at WDSU-TV in New Orleans, Louisiana; managing editor at KDFW-TV in Dallas, Texas; news director at WSET-TV in Lynchburg, Virginia; assistant news director at KATV-TV in Little Rock, Arkansas; and weekend producer and senior producer at WBRZ-TV in Baton Rouge.

Davis currently serves on the Manship School of Mass Communication Board of Visitors, the Emma Bowen Foundation Board of Directors, and is a University of Arkansas at Pine Bluff Journalism School Advisor.

Davis and his wife, Angela, recently celebrated thirty-five years of marriage.  They have two children – Kelsey, a 2011 Manship School graduate, and Kyle, a 2014 graduate of Tulane University’s A.B. Freeman School of Business. While New York City is the family’s base camp, they all love Louisiana and still spend time in New Orleans.

LSU marked the beginning of my thirty-year journey. It means a tradition of excellence and true friendships turned into family. I have lifelong friends from my years at LSU. I love the Purple and Gold!