LSU alumna Elyse Marks (2010 BACH A&D) has worked at architecture and engineering firms in the New York City area that specialize in the restoration and rehabilitation of exterior building enclosures. Over the past five years, her work has focused on exterior facade restoration of historic and landmarked buildings within New York City. 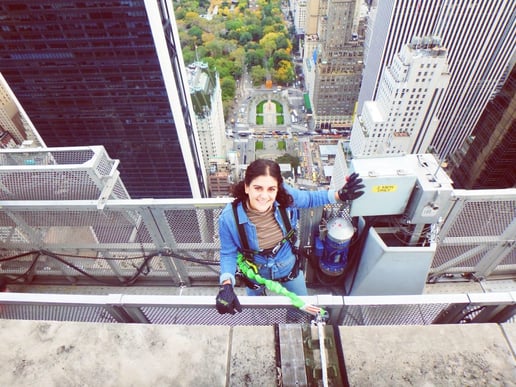 Elyse Marks (2010 BACH A&D) studies the facade of a historic building, inspecting the walls for cracks. Hundreds of feet below her, the city streets of New York buzz, a distant blur. Tethered to the side of a skyscraper, Elyse scales a window stories above the ground, trusting her harness and ropes.

“I get a rush of fear and excitement every time I go over the roof parapet of a new building – it is an incredible experience,” she shared. “The first time I went on a scaffold I remember being terrified the whole time, but at the same time I found it exhilarating. Over the years it has actually become one of my favorite parts of the job, because it means I get to see the city from a very unique perspective that not that many people get to experience.”

After earning her bachelor’s degree from LSU, Marks received a master of science in historic preservation from Columbia University in 2012. She has worked at architecture and engineering firms in the New York City area that specialize in the restoration and rehabilitation of exterior building enclosures. She is now project manager/studio head at CANY Architecture + Engineering, DPC. Over the past five years, her work has focused on exterior facade restoration of historic and landmarked buildings within New York City. 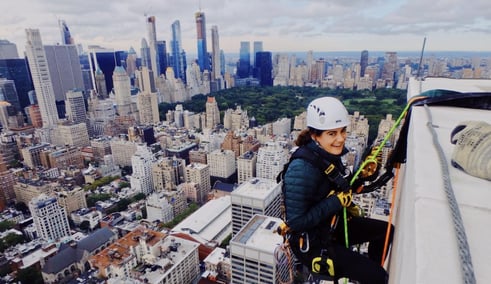 So far she has worked on several historically significant buildings in New York City, such as City Bank Farmer’s Trust Building, Plaza Hotel, Coty Building, Crown Building, and Flatiron Building. “Contributing to the history of these significant structures has been a great honor to me, not only as a lover of architectural history with a passion for preserving the iconic New York City skyline, but also because it is extremely satisfying to see a project come to completion,” she said.

Her journey toward a career in preservation started when she was an undergraduate. Students were tasked with designing a building of their own choosing, and Marks asked a professor if she could pick an existing building on the proposed project site and create a new use. “It was my first exposure to the concepts of restoration and adaptive reuse.”

Now her projects generally begin when building deterioration is noted, potentially posing public safety issues. Marks and her team conduct a comprehensive building investigation, visiting all roofs, terraces, balconies,
setbacks – “every nook and cranny of the building.” For the parts of the building that can’t be accessed
on foot, such as the exterior facade, investigations are typically conducted via rope access, which must be performed by a SPRAT- or IRATA-certified rope access technician. As a SPRAT-certified rope access technician, Marks is able to gain access to all areas of a building to perform close-up inspections, with the purpose of identifying and evaluating deteriorated components of the building facade before they become hazardous.

Marks has received recognition as a female succeeding in a formerly male-dominated field. She was featured on The Today Show, along with several of her female colleagues, on her experiences as a SPRAT certified rope access technician. She was interviewed by Madame Architect on her path navigating a male-dominated industry. “One of my proudest moments was finishing the first full facade restoration campaign where I was involved in every step of the process from initial investigation through closeout,” she said. “Being able to witness and have a hand in bringing a beautiful historic building back to its former glory was a revelatory experience for me – it really confirmed that I had chosen the right career path and that I could see myself doing this kind of work for a long time.”

New York City may seem a world away from Louisiana, but Marks said she always knew that she wanted to go to LSU, and it ultimately led her to the “city that never sleeps.” Her architecture degree was invaluable and gave her a head start when she arrived to Columbia for graduate school, she said. “Because my LSU professors had given me a strong foundation of knowledge on building systems, structures, and architectural history, I already understood the fundamentals of building and design.” The best part of her job: contributing to the preservation of historic architecture that will stand the test of time. “I know that I have participated in some small way to furthering the life of an existing building for future generations to enjoy.”

This article was featured in the LSU Alumni Magazine Spring 2021 edition, titled, "From Great Heights," written by Elizabeth Mariotti. This article is also featured on the LSU College of Art & Design news page.