Major Roy Young is a native of New Orleans and a 1953 graduate of LSU's College of Education. 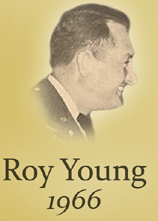 Major Roy Young is a native of New Orleans and a 1953   graduate of LSU's College of Education. During his tour of duty in Vietnam,   he served as a senior regimental advisor for the 7th Vietnamese Regiment and   operations advisor for the Fifth Vietnamese Infantry Division. On five   separate occasions, Major Young was decorated for heroism in battle in   Vietnam.

Twice he received the U.S. Bronze Star for Valor and three   times the Cross of Gallantry from the Republic of South Vietnam for heroism   in the Battle of Dong Xoai and other engagements. He also received four U.S.   Air Medals for action in Vietnam, the Republic of Vietnam Medal of Honor, and   the Vietnamese Parachute Badge. He also holds the Combat Infantry Badge, U.S.   Parachute Wings, three U.S. Army Commendation Ribbons, and several U.S.   Foreign Service ribbons.

For his service in more than 100 aerial missions against   the Viet Cong, Major Young, a qualified aerial observer as well as an   airborne infantryman, received his air medals. Following his tour of duty,   which included organizing, helping to organize, and participating in 40   heliborne operations against the Viet Cong, Young was selected to assist in   authoring the textbook on tactics and techniques of heliborne operations in   Vietnam.

Upon returning to the states, he served as an assistant   operations officer with the XVIII Airborne Corps headquarters staff, Ft.   Bragg, NC. He then became a student at the U.S. Command and General Staff   School.

Major Young is married to the former Alice Ruth Hargrove   of Newelton, who is also an LSU graduate. They have three children.

A native of Grayson, Louisiana, John McKeithen holds two degrees from LSU. He received his bachelor of arts degree in 1941 and his law degree in 1942. 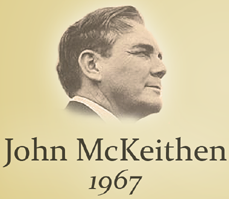 A native of Grayson, Louisiana, John McKeithen holds two degrees from LSU. He received his bachelor of arts degree in 1941 and his law degree in 1942. Prior to attendance at LSU, he was a student at High Point, NC, College, where he was preparing for the ministry.

Entering the Army in February of 1943, he became a commissioned officer in the Combat Engineers. He fought in the Pacific campaigns at Ie Shima, Guam, Leyte, and Okinawa. After the war, McKeithen returned to Caldwell Parish and the practice of law.

In 1948, he was elected to the Louisiana House of Representative and became a floor leader for the administration of Gov. Earl K. Long. After a defeat as a candidate for lieutenant governor on the Long-backed ticket, McKeithen bounced back later to win the North Louisiana seat on the Louisiana Public Service Commission. He remained on the commission until 1964 when he won an upset victory to become Governor of Louisiana.

As Governor, McKeithen devoted considerable effort to the state's industrial development and its ‘national image.’ His administration's legislative program has included passage of ‘code of ethics’ legislation, establishment of a guaranteed student loan program, and passage of industrial inducement laws. He spearheaded voter approval of a constitutional amendment which allowed governors to succeed themselves in office. His work for the Louisiana Superdome Stadium and a professional football franchise helped these dreams to become a reality in Louisiana.

Stephens, president of the Texas Gulf Sulphur Company, has been a 'man-on-the-go' ever since graduating from LSU with a degree in petroleum engineering. 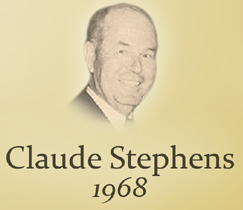 Claude O. Stephens, president of the Texas Gulf Sulphur Company, has been a ‘man-on-the-go’ ever since graduating from LSU with a degree in petroleum engineering.

Starting as a field engineer with Texas Gulf, he advanced to the managership of the company's Wyoming operations, the top position in the gas department, a vice presidency in 1952, and the presidency in 1957. Long ranked one-two among the world's sulphur producers, Texas Gulf, under Stephens' leadership, also became a giant of the copper mining industry with a rich discovery in Canada. He doubles as chairman and director of Ecstall Mining Ltd., the subsidiary corporation formed to handle these operations. In 1960, his duties were expanded to make him Texas Gulf's chief executive officer, as well as the president.

LSU's top ROTC product and Cadet Colonel as a senior, Mr. Stephens more than fulfilled his military promise with a distinguished record during World War II. He advanced from Second Lieutenant to Major of infantry during four years of action in the Pacific Theater. When the war ended for him in the Japanese Occupation Forces, he was a battalion commander and a Bronze Star Medal winner. Mr. Stephens has been active in the American Society for the Advancement of Science and the Council on Foreign Relations and is now a participating member of the LSU Foundation.

His original home was in Bay City, Texas. During his college years he was a member of Pi Kappa Alpha fraternity, Scabbard and Blade, the Geological and Mining Society, and the Pelican Club.

Wes Gallagher was born in San Francisco in 1911 and grew up in Santa Cruz, California.

His Associated Press career started in Buffalo, New York, in 1937 after experience on newspapers in Baton Rouge and Rochester. He entered AP's foreign service in 1939 and served as a correspondent in 26 countries. He reported World War II form Scandinavia, the Balkans, and other parts of Europe and North Africa. He was in charge of all AP correspondents during the Allied invasion of Europe. From 1945 to 1950, he was chief of bureau in Germany where he covered almost all the Big Four, postwar, foreign ministers meeting in Europe, the Nuremberg war crimes trials, the blockade of Berlin, and the gradual recovery of West Germany.

In 1951, he was recalled to New York and named a general executive in charge of AP personnel. In 1953, he also took charge of AP Newsfeatures and The Associated Press picture subsidiary, Wild World Photos. In 1954, Gallagher was named an AP assistant general manger and served in that capacity until his promotion to general manager in 1962. In 1972, the AP membership voted to revise AP officers' titles without changing responsibilities, and Gallagher became president and general manager.

As president of The Associated Press, this LSU College of Arts and Sciences graduate of 1936 exercises personal supervision over the news and pictures that flow over the circuits of the world's largest news-gathering organization. He has led the news cooperative into an era of change in both content of the news report and the methods of its delivery.